I put the bust into Marmoset Toolbag, to render it in real-time. All shading and lighting was done with it. The skin looks way better than it was in iray, I think. Hope you like the new renderings. 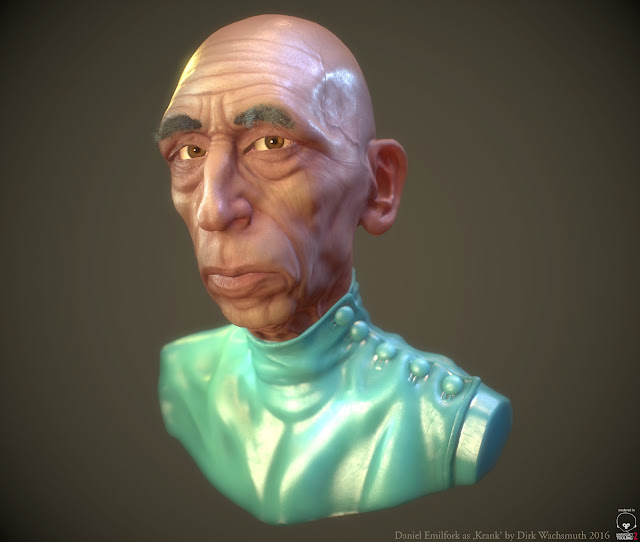 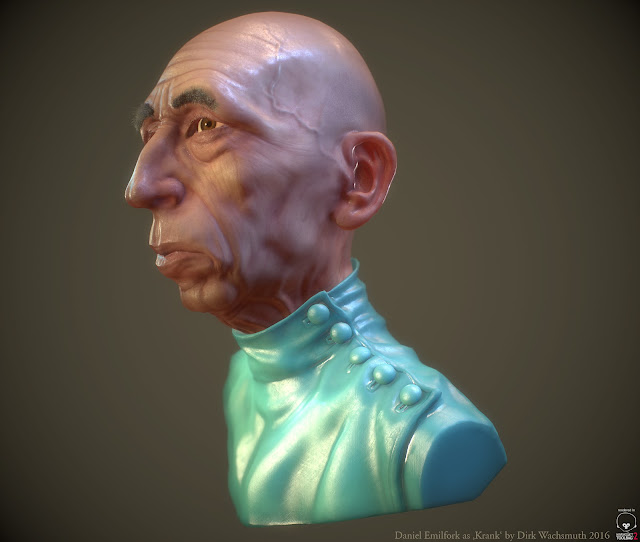 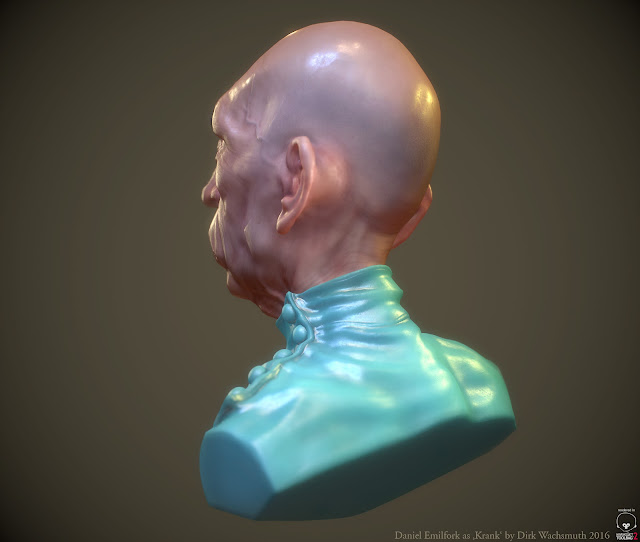 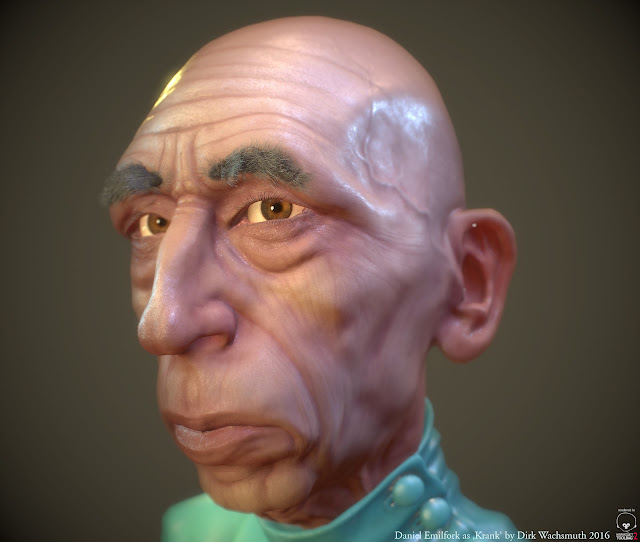 This is the high-poly done with ZBrush:

The low-poly wireframe with 16933 polygons:

This is a realtime portrait of Daniel Emilfork in the role of ‘Krank’ from ‘The City of Lost Children’. It is a tribute to the actor and a great movie which had a huge impact on me.
It was the first time I made real-time hair. Hope you like it.

Here are some final renders done with IRay inside of Substance Painter 2: 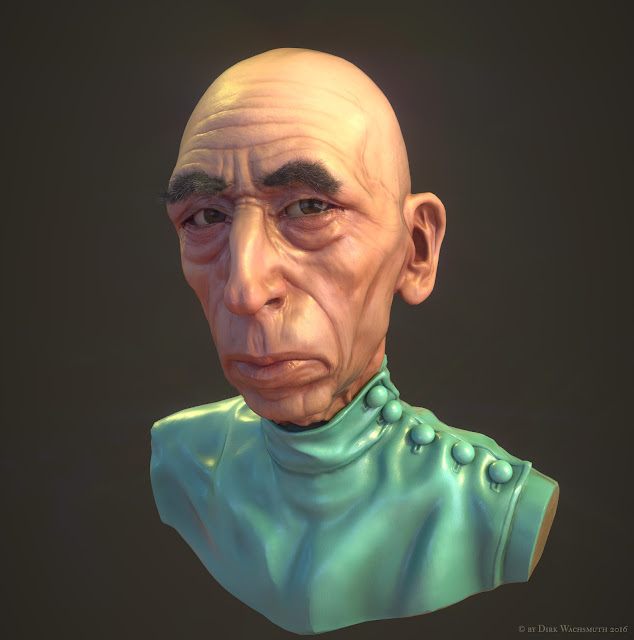 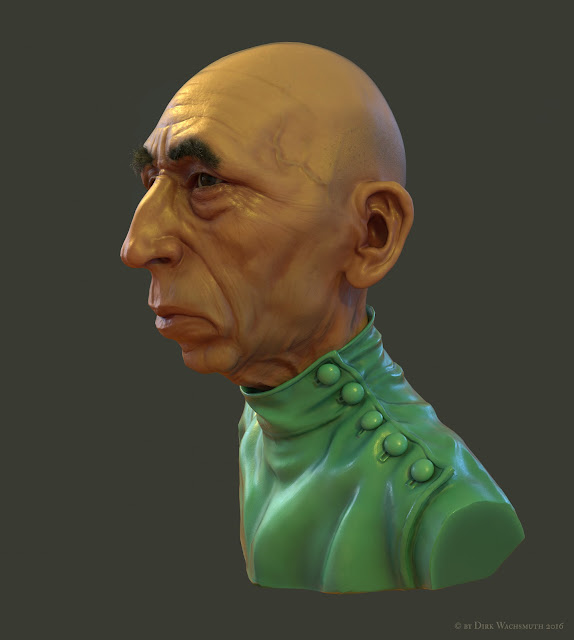 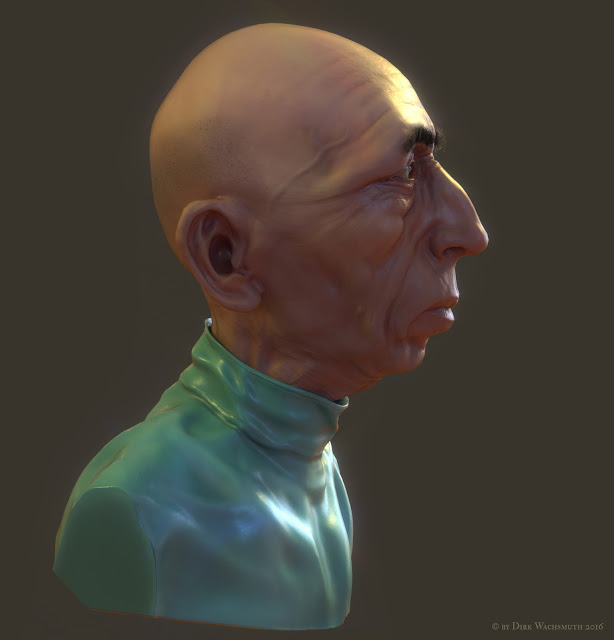 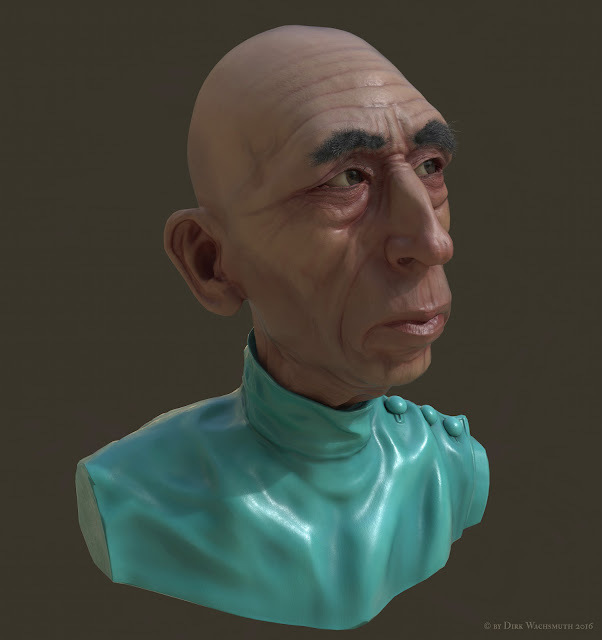 I've also uploaded it on Sketchfab so you can watch him from every angle. All the details would only be visible, if you activate the HD version with the botton on lower right.

Hello there, it's time to show something new in here. There happened some cool things in the last time. For example I finalized my master thesis project for university, it's an animated short. More about this later.

At the same time I participated in some challenges, including the Industrial Light and Magic Department challenge powered by Artstation. It was a great opportunity to show some works to the team which made so many of the beloved movies I have been influenced by since I was a child.

The challenge was splitted into three rounds of hard work. Thousends of very creative people jumped into this adventure with an uncertain ending. After every round the team of ILM judged about the contributions and gave a few of them the chance to enter the next phase.

I made it to the second round, but not to the final one.

These are my contributions:

A 'bodyless' B'omarr monk on a pilgrimage on Tatooine. He is being hunted by some nasty Jawas. The scene reminds of cowboys catching a wild horse. 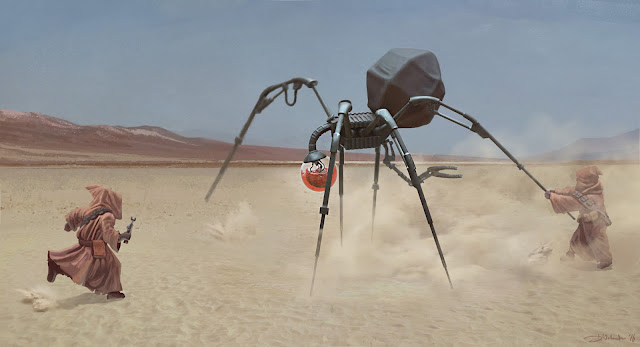 Title: 'Yoda feels a great disturbance in the Force'

My second image is a reference to the great disturbance in the Force Obi Wan feels on board of the Millenium Falcon in the moment when Alderaan is blasted by the Empire. So I wanted to show how Yoda reacts at this moment. 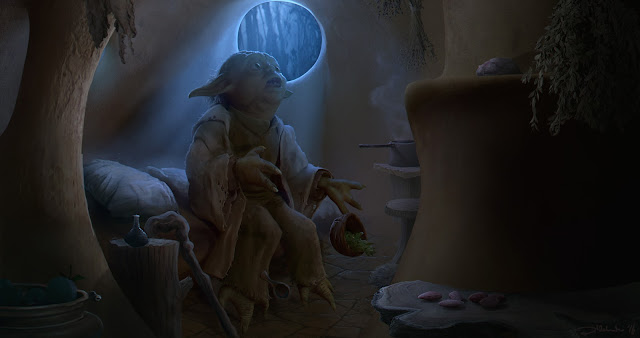 The idea was to show the moment a Jedi lost his prosthetic arm with his (or maybe her's) Lightsaber. 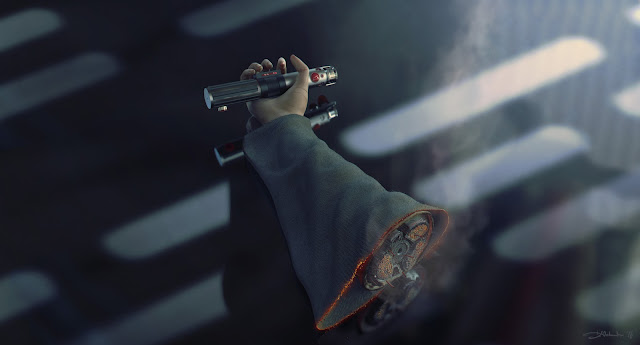 The idea for my fourth and probably last contribution is a scene on Dagobah. A vagilant probe droid searches for rebels or maybe for Luke Skywalker in person.

I love the mood and atmosphere on Dagobah. It fascinated me since I was a kid. 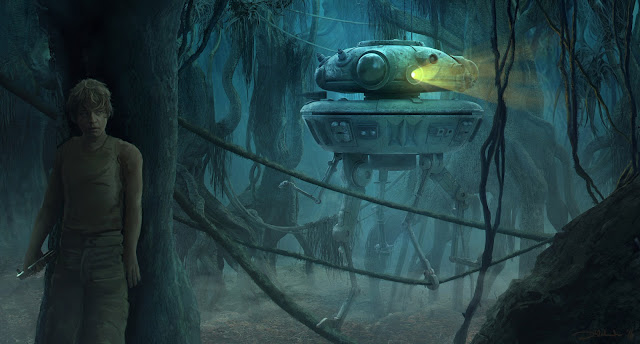 Design two (2) new Star Wars vehicles within the aesthetic of Episodes IV - VI. They can be Rebel, Imperial, or utilitarian — your choice; anything from a giant starship to a land speeder. Be sure to finish your images by placing the vehicles within the context of an environment. We want to see the story — not the blueprints.'

The idea is that a team of specialized workers clean the normalised tubes of the sewer system with their cleaning machine. Four seats and a lot of cleaning tools (circular vibro-blades, scraper-robot-arms and rotating shovels) are mounted on one cylindrical shaped vehicle. The job is hard but they have to do it. Sometimes they can find great things in the nearly infinite deepness of the sewer system. In my scene they killed a straying Dianoga critter and showcase it in the light of the machine's headlights. 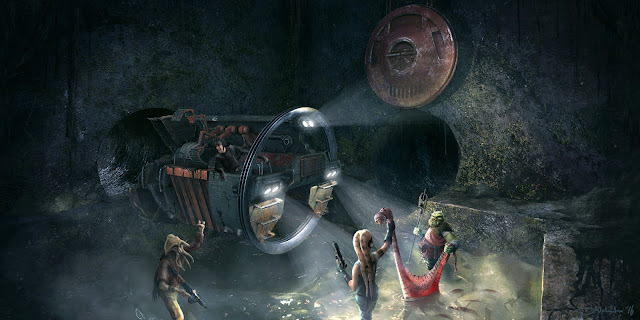 I started to think about interesting places in the Star Wars galaxy where I would love to create a vehicle for. Kuat was definitely one of these locations. A terraformed planet in the center of the galaxy surrounded by a huge circular orbital shipyard. Whenever someone wants to build such a huge flotilla like the imperials need, he needs resources from outside the system. These ressources need to be transported to keep the machines of the industry running. Besides the sophisticated matriarchy of Kuat has a hunger of exotic luxury goods. Most of the planet's surface is described as an artificial park-like habitat but I think they run some scattered industry on it too. Anyway, they would need cargo transportation ships. My idea was to show one of these ships at the moment of delivering cargo to a planetary site.

The Beast Character Challenge - The Awareness

Another challenge I participated in was called "The Beast - A Character Art Contest", presented by Allegorithmic and hosted by Polycount.

'In any adaptation of this universal theme, between the Beauty and the Beast, the Beast has always been the most fascinating character. He is a freak of nature, a monster, an anomaly who doesn’t belong in the world he lives in. But as strong and scary as he may look on the outside, the Beast’s repulsing appearance hides a fatal weakness. Because the Beast loves Beauty, and his love will invariably cause his undoing.

From Cocteau to Disney, from Boris Karloff to Johnny Depp or Andy Serkis, from Half Life 2's Dog to Bioshock's Big Daddy, the Beast has been portrayed hundreds of times in hundreds of different ways. Now what’s your take on this legendary creature?'

I decided to create something close to the original fairytale. But it is something like a prequel scene. I wanted to show the prince who had previously been cursed by an evil witch. He is looking into the mirror, becoming aware of his new monstrous appearance.

With my pose I want to show the pain he feels, while he discoveres his new visage in the mirror. He has to be literally crushed by the 'weight' of this awareness. So I sculpted an analogue prototype with clay to define a pose of this kind.

The character will throw away his cloths to survey his body modifications in my scenary. So the character has to be developed in a full dressed version too. This will be my base for the t-posed character sculpture inside ZBrush.

The Final 3D Scene on Sketchfab


The Awareness (Polycount Beast Challenge) by Dirk Wachsmuth on Sketchfab 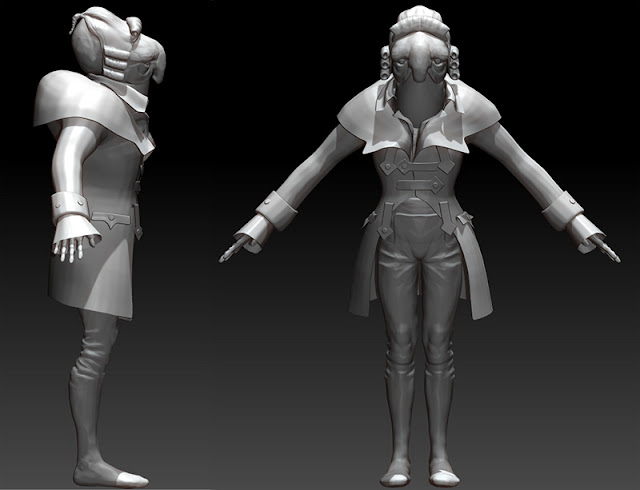 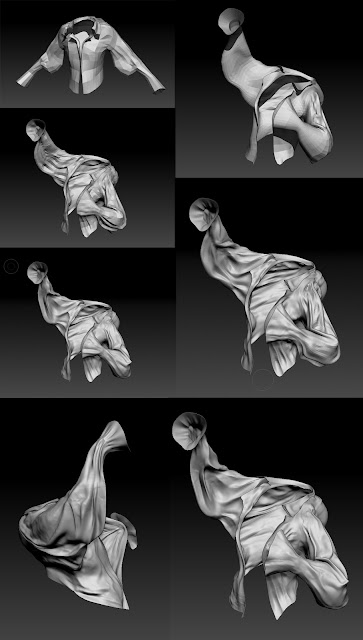